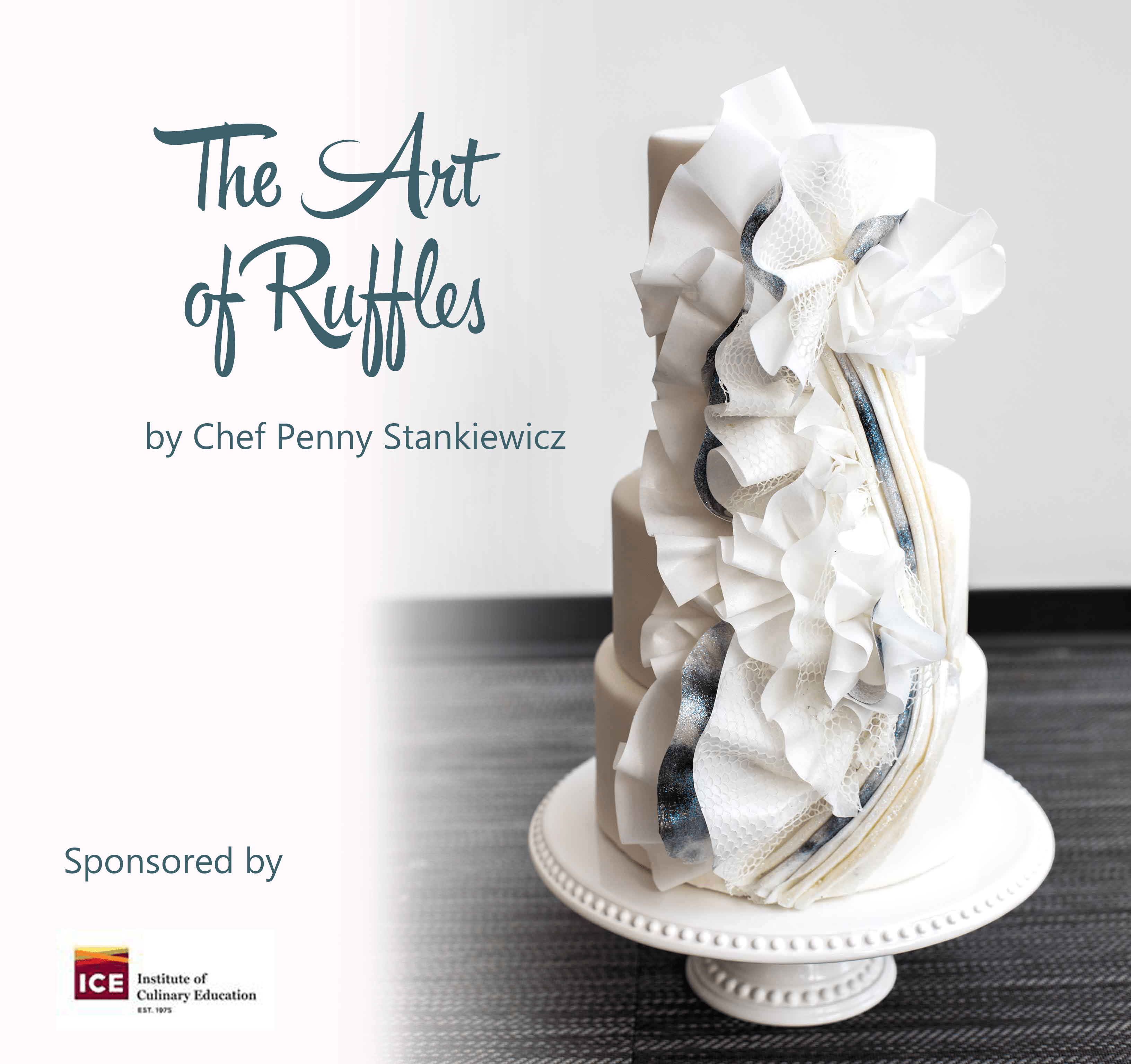 Experimenting with the Art of Ruffles

“Fashion is one of my most favorite forms of inspiration, and ruffles and pleats come straight off the runway. As such, there are many interpretations of each treatment, from tight and formal to random and wild, ” notes Chef Penny Stankiewicz, adding, “With certain touches, ruffles or pleats can seem intentionally vintage or accidentally dated, but with a new eye, they can be brought into the modern design world.” Join Penny Stankiewicz – Chef-Instructor, Art of Cake Decorating as she experiments with the art of ruffles!

Many cake designers have developed techniques for ruffles that are so distinct, they can be associated with the artist at first glance. Tight, gum paste strips, ruffled at the top with a hand tool and layered top down in a tight formation to create a voluminous effect is practically a brand for Maggie Austin. Large, swooping single layers that broach the top of the cake – Betsy Thorleifson. Variations with rough and rustic-looking ruffling, like it’s peeling straight from the sides of the tiers, belong to Jasmine Rae. Ruffles are everywhere in cake design – vertical or horizontal, thick or thin, structured or random. There are even popular buttercream trends that mimic the styling. As artists who happen to have cake as a preferred medium, it’s important to find ways to express a style in something that feels new.

For this project, I knew I wanted to work with a form that begins in a strict structure and finds its true nature in something wilder. I was inspired by a design from Alexander McQueen that had black-to-white ombre ruffles on it, so my mind went straight to a white cake with black touches. I wanted a material that would be as delicate as fabric, yet have variation. I knew fondant wouldn’t have worked well, because it’s not thin or structured enough to hold its shape without drying in place before being put on the cake. For that, I would need a much more specific plan for how things would fit together than I really wanted. I thrive in a setting where I can play with something until it works. I tried gum paste, which somewhat solved the structure issue, but it was still too thick and when it gathered, it had a look to it that was too soft for what I was aiming for and was very similar to the ruffle rosette cake I’d done before. Repeating myself creatively isn’t fun for me, and I try to avoid it whenever possible.

I knew I wanted a lot of texture in the final cake, and so the first things I made were sheets of edible lace netting. In the past, I’ve tried most brands with varying success for different uses, but I didn’t have any on hand, so I decided to make my own mix. This mix was perfect in the netting lace mold I have been looking for a reason to use forever. (Sometimes the tool predates the project.) I spread the paste into the mold, microwaving for a bit more than a minute for each sheet, and in no time I had 10 sheets of edible netting lace.

I’ve been obsessed with a technique for turning wafer paper into a stretchy edible fabric since my friend and amazing, talented fellow cake designer, Kate Sullivan, told me about it. Since it’s paper, it would remain very thin, but flexible, and I knew it would be great for the more structured pleats. To make it, you mix together melted powdered gelatin with glycerine and paint it on both sides of the paper. After a few minutes, you coat both sides in dusty, dry material, cornstarch, luster dust or something similar. To add the black touches, I roughly brushed the tacky paper with black petal dust, running down the length of the paper, then dusted all over with a white glitter luster. It was random and felt very textured; and when folded, created a beautiful variegated feeling for the black touches.

The layered pleats were my touch of structure, and I created these first with the handmade edible fabric. I used only one of the black pieces among four white glitter ones. Once assembled, I removed it and started building the ruffles so they would appear to be coming out from it. I used the netting pieces directly up against some of the plain white wafer paper, sprayed with wafer paper potion to make it flexible without disintegrating. The combination of some wafer paper with netting and some without looked really good. Looking at the form, I wanted to bring a bit of the black from the pleats over to the ruffled section. I cut random thin strips from the edible fabric and placed them between some of the white ruffles to balance the colors.

I also made black edible glitter and was brokenhearted that I had to leave it off the cake. There were moments of the creative struggle in there when I wasn’t quite sure I was going to be able to fully translate my vision, but you keep working through the frustration and unsuccessful attempts, and you find the way. You edit, you find the sense of balance and you see the design not as it was in your head, but what it has become. The resulting cake feels beautiful, elegant and just the tiniest bit visually challenging, which I strive for because it makes you think. It has a sense of drama, of texture and delicacy.

Chef Penny Stankiewicz is a chef-instructor for the Art of Cake Decorating program at the Institute of Culinary Education. To learn more about the programs offered at ICE visit: https://www.ice.edu/newyork

« Tutorial: Aged Fondant
Five Instagram Trends to Look out For in 2019! » 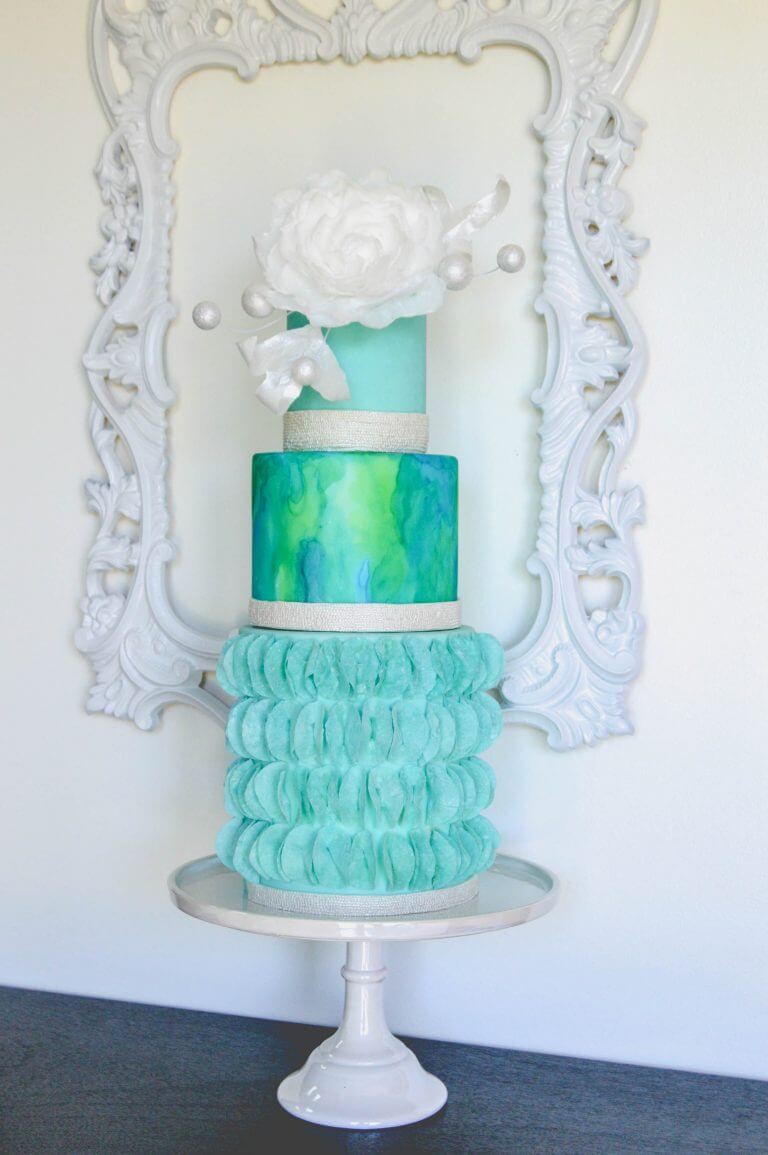