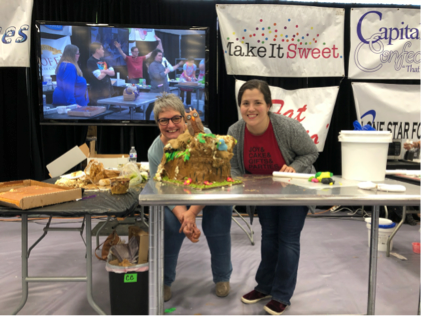 Last month was my third time attending That Takes the Cake (TTTC) in Round Rock, TX, and as usual, the show did not disappoint. This year’s theme was Mythology, a genre sure to inspire cake artists of all skill levels. To add to the excitement, Julia M. Usher brought her cookie competition to Round Rock, attracting top cookie talent from all over the world.

My weekend started with a three-and-a-half-hour drive on Friday afternoon with my cake competition entries in tow, including a large sculpted turtle cake for the big showpiece competition. Driving with a huge cake in the car is a daunting task, but thankfully it did not sustain any damage! 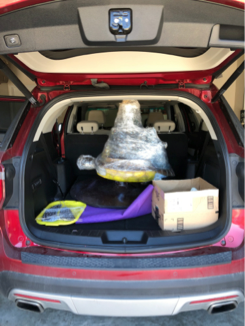 I arrived just in time to drop off my turtle cake and then head to a piping class held by Susan Trianos, where she not only taught us how to make a cool spiderweb cake but also gave us tips and tricks she picked up over the years and answered all our cake-decorating questions. One of the best parts of attending a cake show is the opportunity to interact with and learn from expert sugar artists. There were so many classes and skills offered over the weekend to choose from. 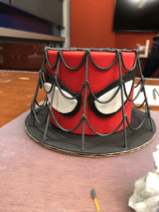 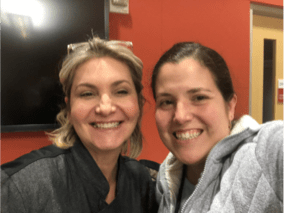 Meeting and learning from my cake hero, Susan Trianos

The next morning, I headed to the venue early to put the finishing touches on my turtle cake and drop off the entries I made for the Divisional competition. Once the time to place entries on the tables had passed, the show opened its doors to spectators and shoppers, but before I could venture out into the sea of vendors or even scope out the competition I made my way to the main stage with my friend, Christy, to participate in a Mystery Box Challenge. We and four other teams of two were charged with creating a cake around a mystery structure in just an hour and a half. In the last 15 minutes our cake completely collapsed, but we never gave up and still had a great time!

After our hilarious cake fail, we walked around the show floor, admiring the amazing competition pieces, chatting with fellow sugar artists, shopping the bake sale, and learning about amazing products that would surely bring our cake (and cookie) making to the next level. Throughout the day, classes were ongoing, judges could be seen hard at work evaluating each competition entry, volunteers helped kids create spin art cookies, and the main stage hosted demos from Simi Isomalt and Sugarprism, along with two more Mystery Box Challenges before closing for the day. 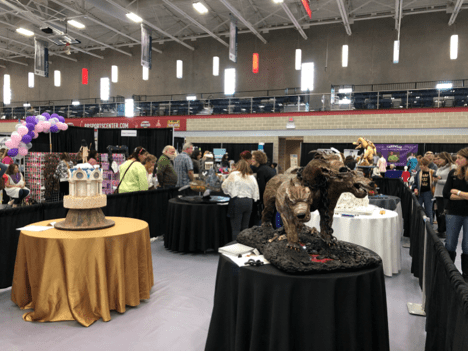 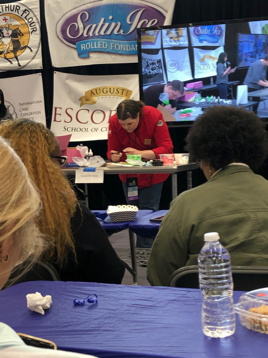 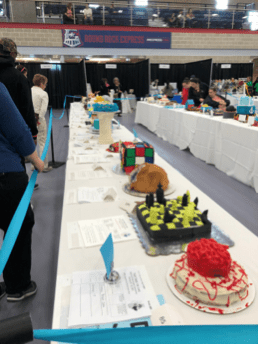 Some of the Junior competition entries

On Sunday, the excitement in the air was palpable as competitors headed in to see how their entries had been judged. Each piece had been labeled with a platinum, gold, silver, or bronze sticker, correlating to its score. I was pleased to learn that all three of my entries earned gold. 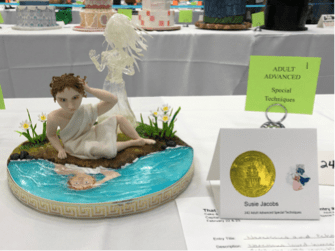 We would still have to wait until the award ceremony in the afternoon to learn who had won first, second, and third place for each category and division. One of the great things about That Takes the Cake is that it is an awesome opportunity for cakers of all levels to compete, get valuable feedback, be rewarded for their hard work, and grow as decorators. After a few more hours of shopping, more main-stage demos and challenges, and the raffle drawing, it was finally time for the awards ceremony. First came the Junior awards. I love that each child’s entry is recognized in a unique way, such as “Best Use of Black on a Cake.” The kids are so proud of their cakes, and it is a great way to lift up the next generation of cake makers! 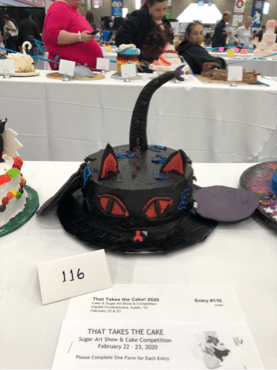 The winners of the prestigious Julia M. Usher Cookie Art Competition were announced next, with Laura Saporiti taking first place, Thomas Hogan taking second, and Stacy Frank taking third in the 3-D cookie category. Their creations were incredible! They really took cookies to the next level. 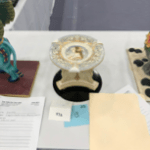 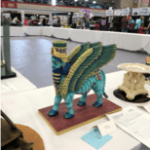 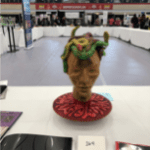 (First, second, and third from left to right) 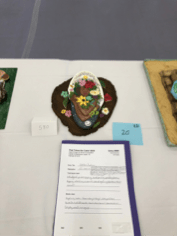 Finally, the moment I had been waiting for arrived. The winners of the cake competition were announced. I entered two pieces in the Advanced Adult division and one in the Sculpted Showpiece category, which had its own separate set of rules. As I mentioned before, the show awards competitors at all levels, so unfortunately it would be impossible for me to list all the winners of each division and category, but I will share some of my personal favorites and you can check out That Takes the Cake’s Facebook page for a full video of the awards ceremony.

The Sculpted Showpiece category was very tough. Cakes had to follow the show’s theme, be large enough to have a minimum of 100 servings, and be made of edible materials. There were some truly excellent entries. My turtle showpiece won third place. I had never entered this level of competition and felt like I was out of my league by even trying, so placing third was an absolute thrill. 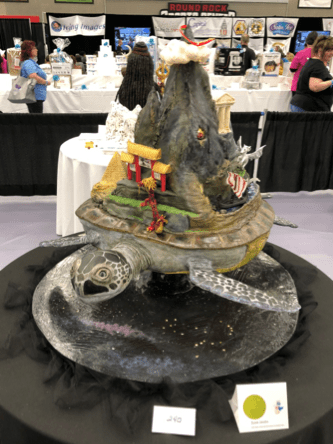 Second place was awarded to Cassandra Fairbanks for her stunning Icarus cake, and Shelby Bower took first for her gorgeous portrayal of Daphne turning into a tree. I was in awe just to be in their company. 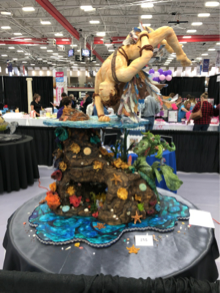 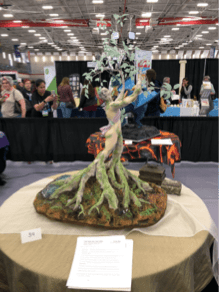 In the Divisional competition, Kandice Douglas won Best in Show with her perfectly clean and intricately detailed Ganesha cake. Every time I walked past this cake, I found new things to admire. 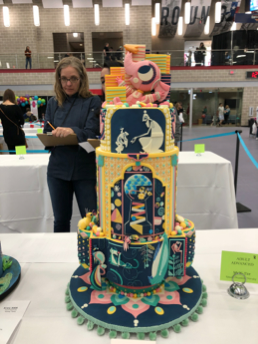 A few other cakes that I loved: 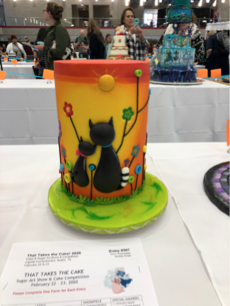 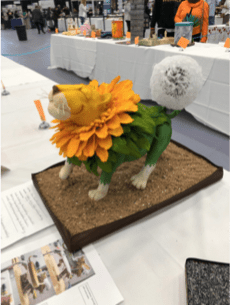 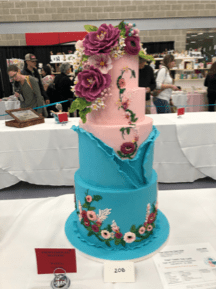 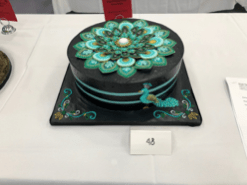 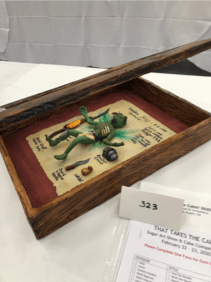 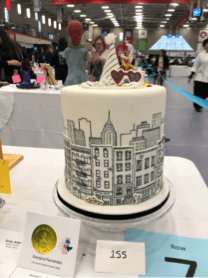 This is just a very small sampling of the incredible talent on display in Round Rock. My first cake show I ever attended was TTTC in 2018, and since then I’ve had the cake show “bug.” I’ll keep going back every year (and looking for other shows to attend in other parts of the country, too!). There is so much to offer, before, during, and even after the show. This year, I stayed in Round Rock for one more day to take an all-day flower class with Nicholas Lodge. I couldn’t pass up the opportunity to learn from a master sugar artist, and the class was well worth the time. 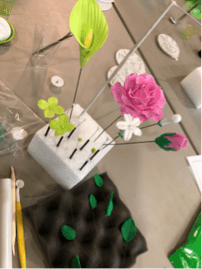 Now I’m back home, reflecting on all I learned and experienced…and already looking forward to going back. At the end of the awards ceremony, the theme for the next year’s show was announced. The theme of That Takes the Cake in 2021 will be Cakeopoly: Family Game Night. I hope to see you there!