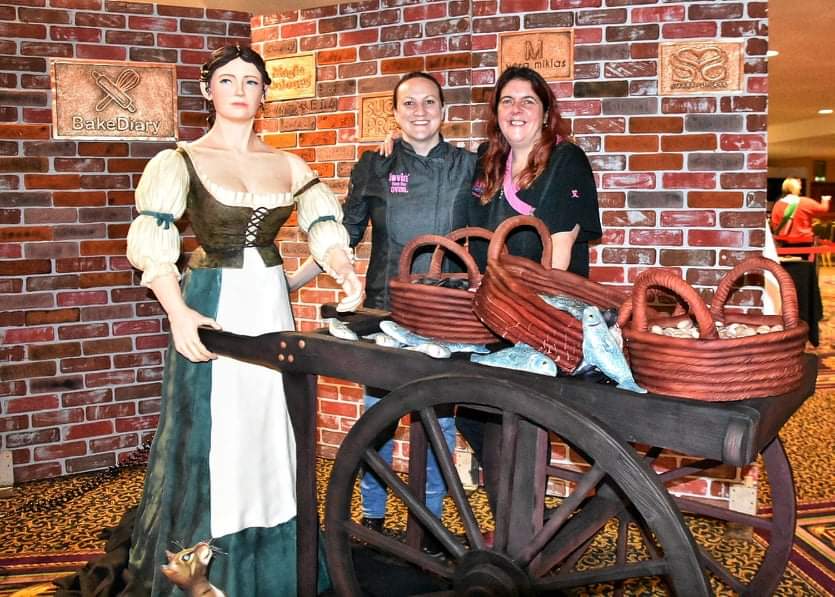 In February 2020, two of Ireland’s most revered cake artists, Tanya Ross and Corinna Maguire, made a life-size Molly Malone for the Irish Sugarcraft Show in Dublin. Watching the talented pair finish Molly as a live-build, dressing her in fondant to the gasps from onlookers, I had to take the opportunity to find out more…

What made you choose Molly Malone as your display piece?

Corinna: I was on the bus back from Cake International 2019 and we had just gotten an invitation to create a showpiece for the Irish Sugarcraft show. It was a LONG trip! I got Google out and searched for something iconic of Ireland/Dublin to re-create. As soon as the Molly Malone statue popped up on my feed, that was it. It had to be the beloved “Tart with the Cart.”

Tanya: We were queuing to board the plane after Cake International (CI) to go home and chatting to Ross and Clayton from Bake Diary, who mentioned they wanted to help get a showpiece done. Well, we were all exhausted after CI but still on a cake high, and before we were boarded, we had agreed to come up with something together. The day after we got home, Corinna called me and said she thought Molly was the one! It kind of grew from there; we wanted to do it as a fundraiser and I had helped with a fundraiser for the local dog rescue, where they sold bricks, and we decided to go with that as a way of raising money without just asking for donations. It was a great way of getting people involved and kept a lovely buzz going at the stand all weekend, too.

How close is she in stature compared to the real Molly in the center of Dublin?

Corinna: We decided that it would be in our benefit to make her a realistic version as opposed to the bronze one that she actually is. This gave us that wiggle room to interpret her in our own way. The real statue is slightly larger than real life. So our lady is a shorter version, but I still tried to have her pose and face as similar to the original as I could.

Tanya: Corinna worked out all the dimensions, with Paul Redmond taking photos of the real statue as a guide. I have to give kudos to Corinna’s calculations, because, even though the two halves were built at separate locations, they still fit perfectly!

Our editor got to see the real Molly Malone statue in the center of Dublin before being wowed by the live-build at the show (touching her breast is said to bring good luck!) 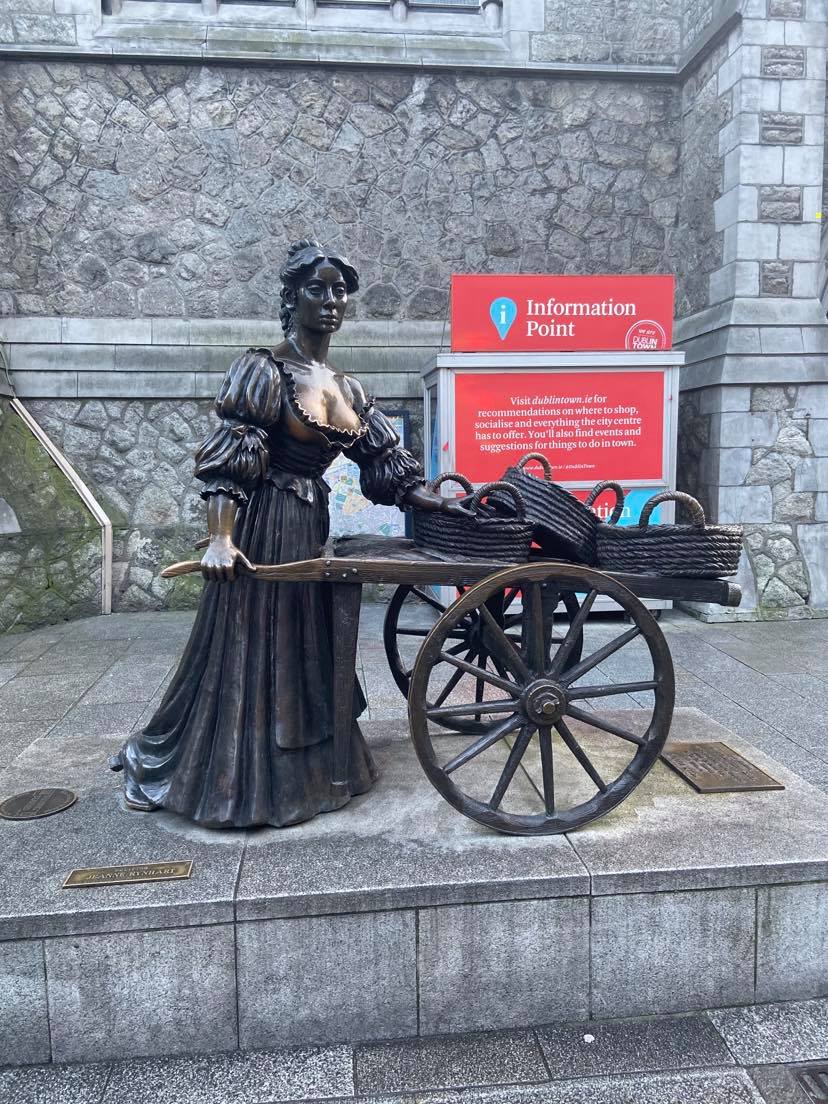 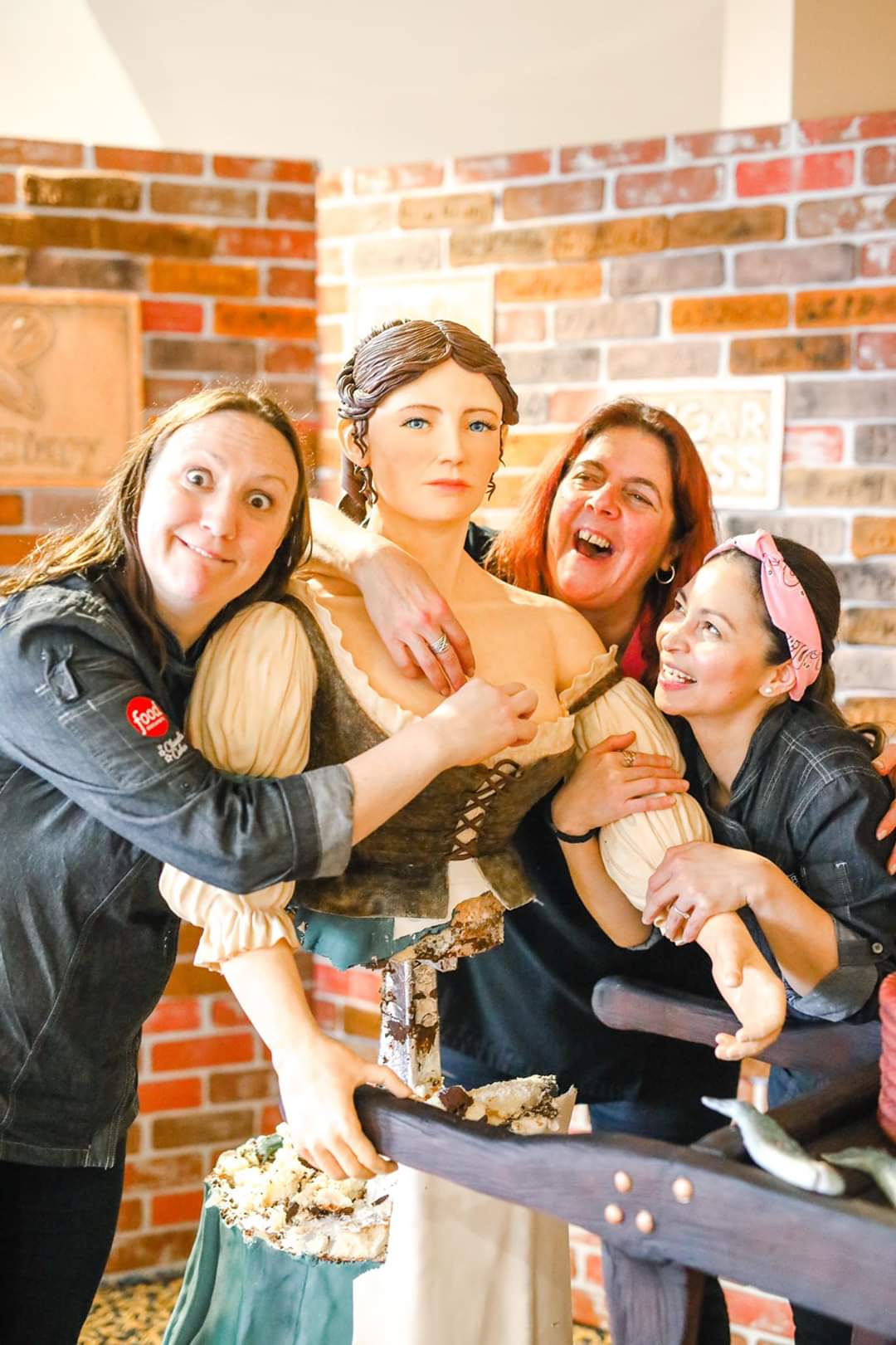 How many hours did she take to create?

Corinna: Molly took at least 60 hours to create her torso, head, arms, and corset. In fairness, I probably could have finished her earlier, but when you’re staring at a piece you end up nitpicking and doubting yourself. I ended up wiping and repainting her skin four times, as the color kept getting blotchy. Her skirt was then filled with cake, buttercream, and ganache on-site on the Friday before opening day. We then decided to turn it into a “live-build” and cover her skirt with fondant on the first day of the show. We needed sleep!

Tanya: I didn’t really total up the hours, as I was working on it in between getting orders done, but I can say it took longer than I thought it would. The baskets took a good while because of the style; there’s no handy basket-weave rolling pin for these types of baskets! The fish and mussels took a good while too but were great fun to make and were a nice change from getting the wood effect on the cart.

Is she cake inside or RKT?

Corinna: Molly’s torso is all carved Rice Krispies Treats, but her arms are tinfoil. I had a hard time getting the RKT to stick to the frame, so had to call it with the tinfoil. Her skirt is almost entirely made of cake though. 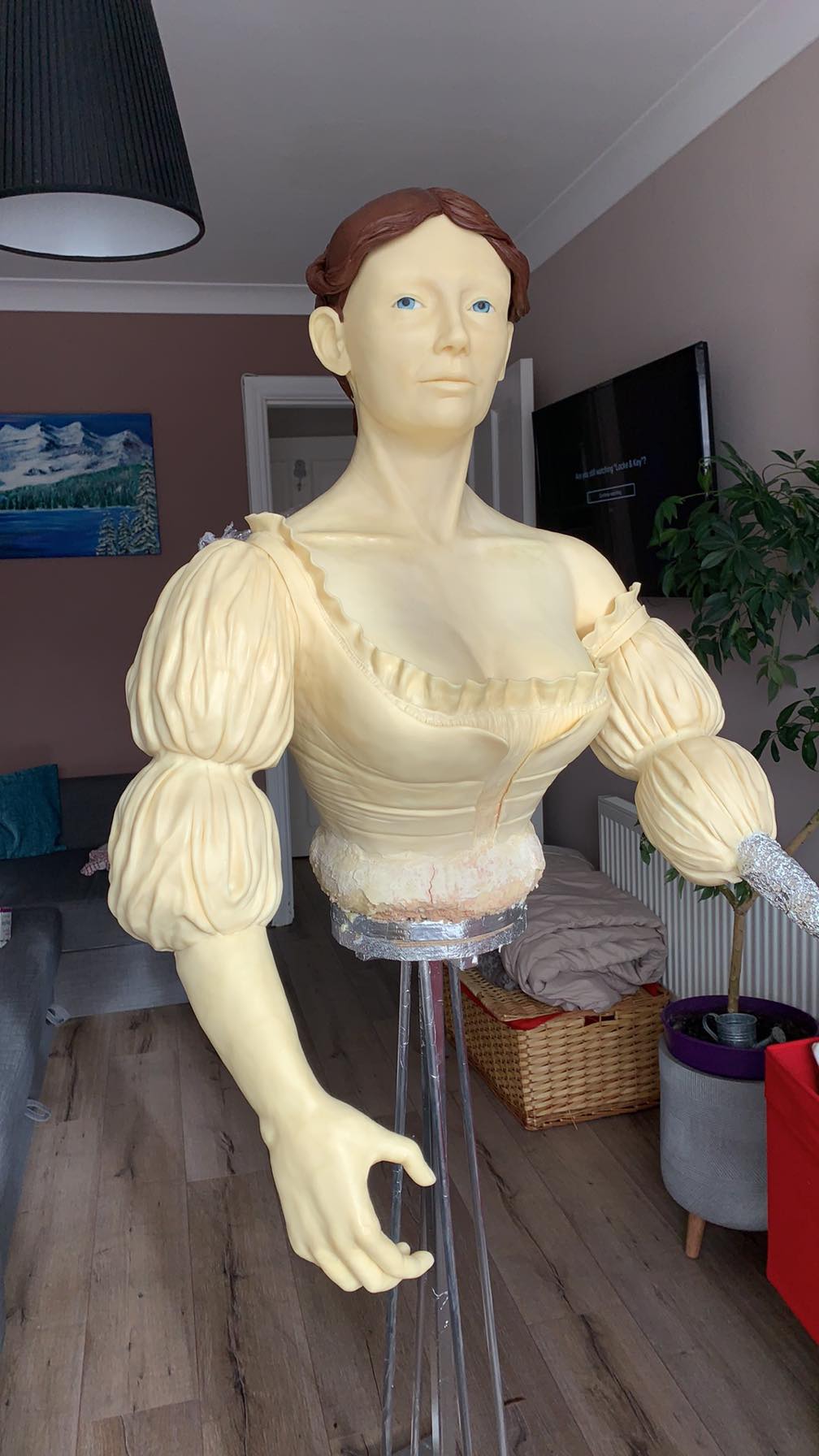 Tanya, how on earth did you make the cart?

Tanya: We had to go with a wooden structure for the cart, as it was too big and had to hold the weight of the baskets and all. Corinna has a friend who had helped us with a wooden structure on a previous project, and he made up the wheels and cart for us. I brought it home and had to build up, ice, and texture it all before spraying it. Unfortunately, I couldn’t attach the wheels until we got to the show, as the cart wouldn’t fit through my cake room door with the wheels on. And because it had no wheels, we couldn’t add the baskets, etc., until we got to the show either.

How did you move her to the venue?

Corinna: With great difficulty! It was a nerve-wracking journey from Galway (one side of the country) to Dublin (on the other). We rented a massive van and strapped her frame to the sides with anything that we could find (martial arts hand wraps!). But Molly is nothing without her wagon, so we stopped off halfway across the country and collected it at Tanya’s place before bringing them both to Dublin for the big reveal.

Tanya: As Corinna said, she stopped at my house so that we could load up the wagon. I had built a support frame to hold it up until the wheels could go on, so we loaded it in, then the wheels, propped up and held in place with packs of icing, loaded in all the boxes with baskets, fish and mussels, and we hit the road for the last leg of the journey.

The detail is exquisite, did you use molds for the cockles and mussels? 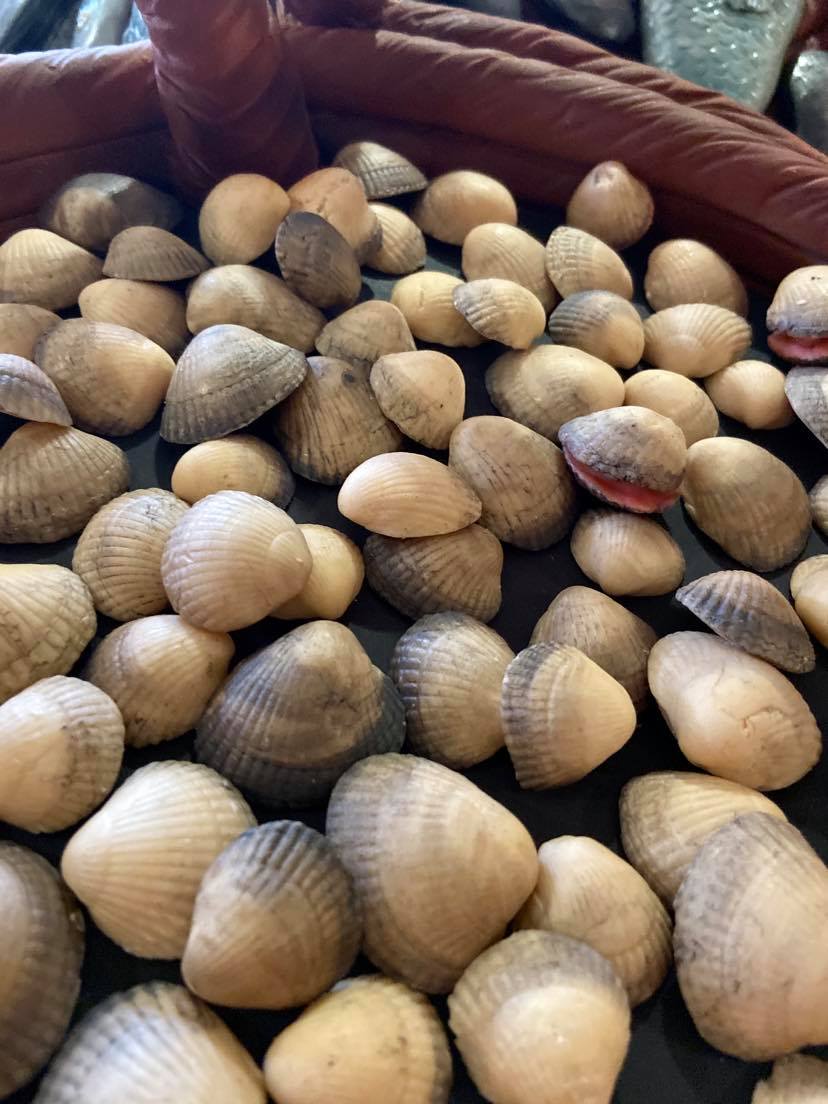 Corinna: I had a mold that I made for a sea-themed cake before that I was able to use for the cockles. As much as I like creating things by hand, when you need to make dozens of items a mold comes in handy all right!

Tanya: Unfortunately, I didn’t have a mold for the mussels and fish, so they were all handmade with a mix of modeling chocolate and icing. 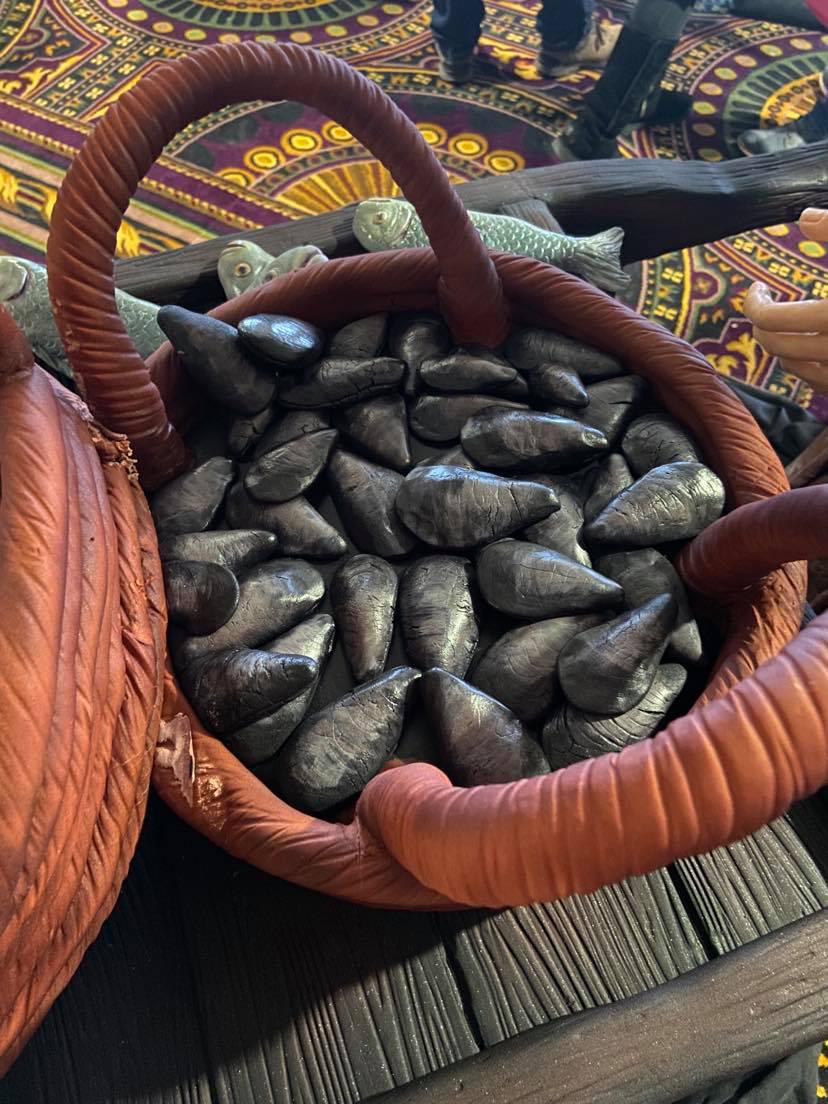 Who made the sweet cat?

Corinna: Milene Habib (Sweet Mi) from Portugal made the cat. She came to visit me in Galway for a couple of days before the show. While she may have been here for a holiday, I managed to also put her talents to work. She had brought her cat with her (in its own seat) to add to the display, but she also made Molly’s shoe and was a great help building up the cake in her skirt on the Friday. The cat was a huge hit. I even caught some small toddlers trying to pet it! 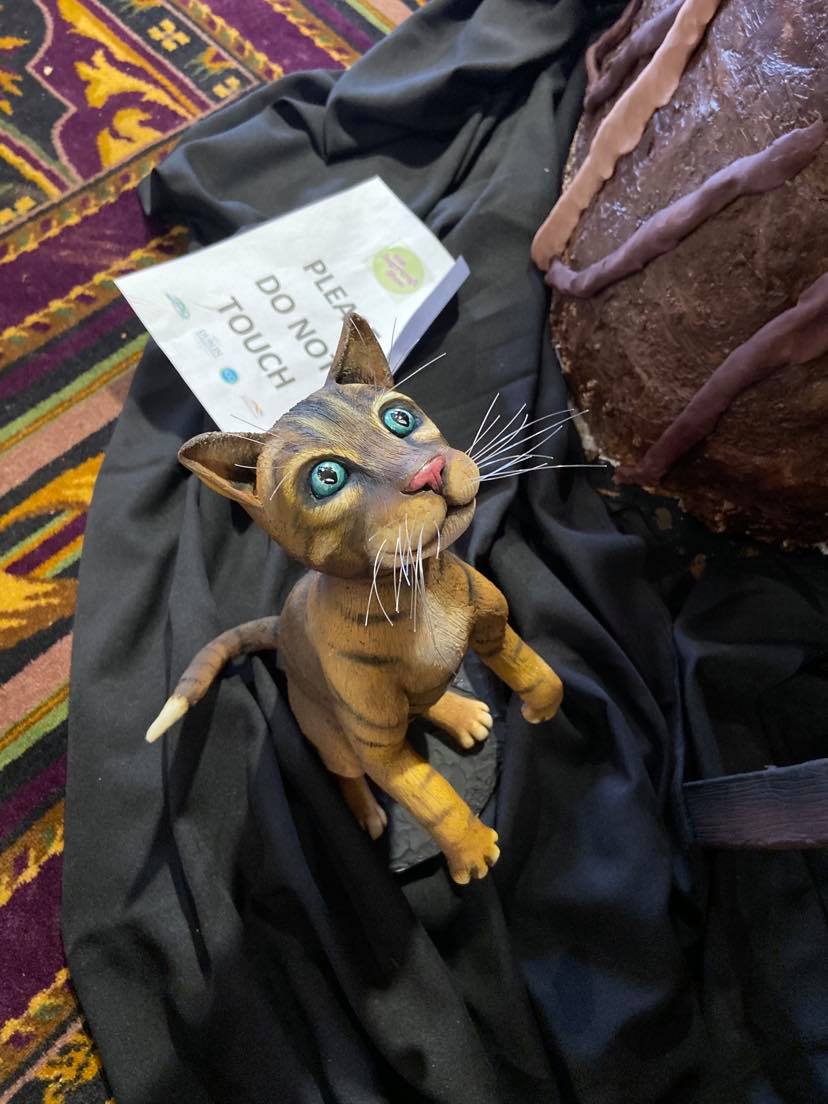 Tanya: The pretty kitty has come to live with me now…perfect Portuguese pet.

The wall behind her featured personalized bricks to fundraise for Temple Street Children’s University Hospital. How much did you raise? 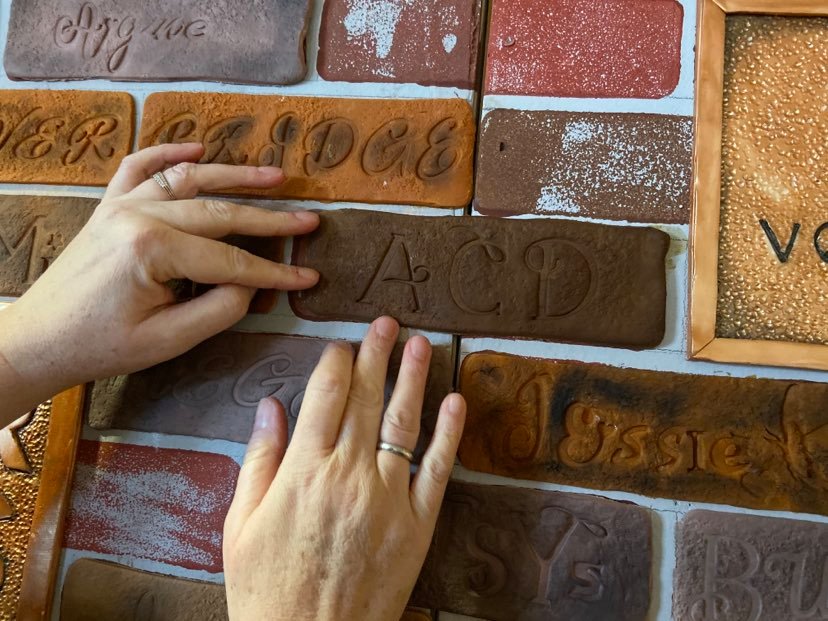 Corinna: We were thrilled with the response on this part of the showpiece. Everyone was excited to take part. Each one also went in for the draw of the Kenwood mixer and they were just happy to help raise money for the cause. So far we’ve managed to raise almost €2,000 for the hospital.

Tanya: There was an amazing response, very heart-warming.

Is Molly your first life-size sugar installation? Would you do it again?

Corinna: While I’ve created life-size portions of people—legs, busts, etc.—this is my first full life-size figure so far. Yes, I’d definitely do one again. It was a mammoth task, but I have to say I enjoyed it. A few bumps in the road with the coloring, but it was all worthwhile and we couldn’t be happier with the reception of it.

Tanya: I think this is the largest project so far, although I did do a life-size Santa for The Late Late Show with Maria O’Connor before. I would definitely do it again, I’m always happy to work with Corinna.

You mentioned water ganache in your video, can you tell us more?

Corinna: Milene was the one who enlightened us about water ganache. We didn’t have any double cream and before we tried to find someone to pick some up for us, she mentioned water ganache that she uses at times. Of course, a mixer would have come in handy to make it and poor Milene probably needed a sling after it was done, but it worked out great!

Tanya: Milene did Trojan work with the ganache. I bet she really appreciates her mixer at home now!

Who were your sponsors?

Corinna: Our sponsors were amazing. First of all our main sponsor, Bake Diary, approached me asking to sponsor a showpiece. They funded the entire project and worked with us to organize and plan of it. HUGE thanks to them. Ice Wise Sugarpaste supplied all of the fondant to cover the wagon, dress, and ALL of the bricks (which was a lot). It’s a great product to work with, so we were thrilled. Sweet Success in England supplied all of the cake that filled her skirt. It was so tasty that people were coming back for second and third portions and even asking for doggie bags to bring home. Magic Colours, which we both love to use, kindly supplied all of the dusts, gels, and airbrush colors that we needed. Vera Miklas supplied us with all the modeling chocolate. This is my favorite brand; it stays firm enough to use, blends great, and tastes amazing too. All of Molly’s torso, head, and arms were made using it. And finally Sugar Press, the very durable cake letter stamps, supplied all of the letters that everyone used to imprint the bricks. They were thick enough that everyone was able to use them easily and had fun mixing and matching the letters and shapes to personalize them. 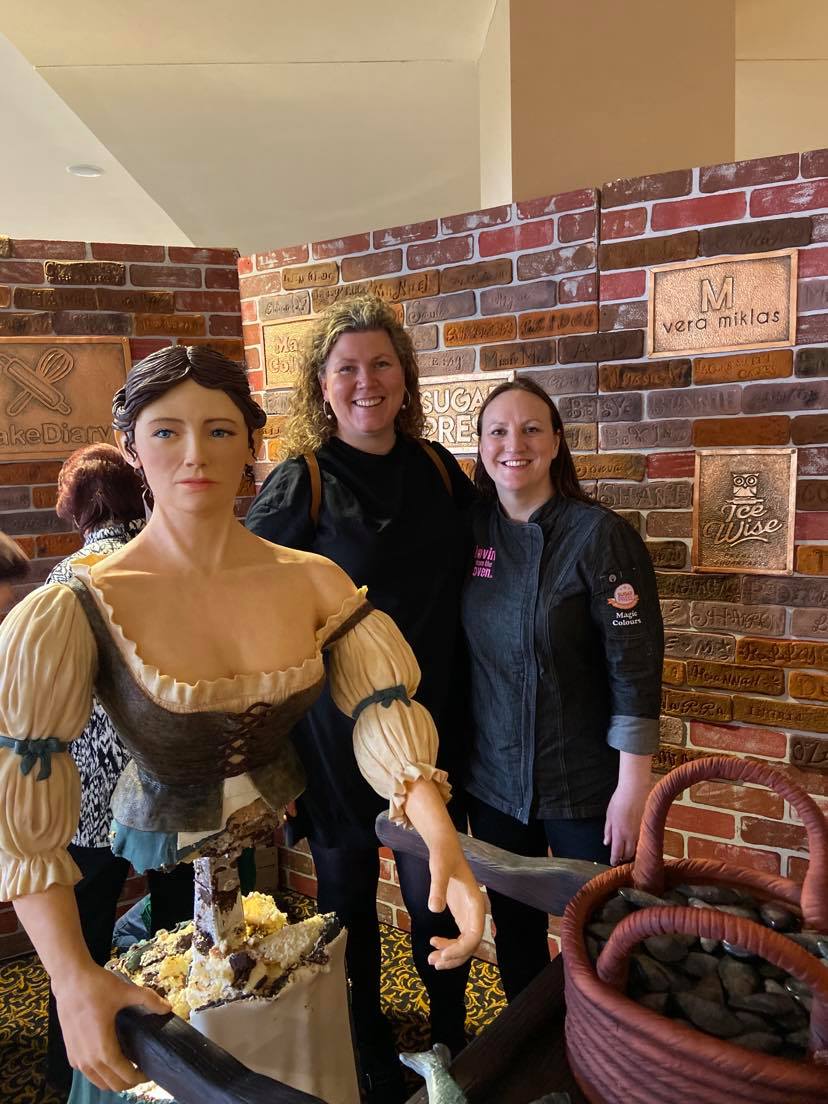 Tanya: Our sponsors were amazing, and thanks to them we got to do exactly the type of showpiece that we wanted to do. And I think it was great for all of us involved to feel like we were giving something back!