Banana bread is perhaps one of my most favorite things to eat (ever). I adapted my go-to recipe recently for a banana bread obsessed bride to create these scrumptious cupcakes. Combining over-rip bananas with crunchy walnuts and a delicious mound of cinnamon buttercream for the perfect, decadent bite. 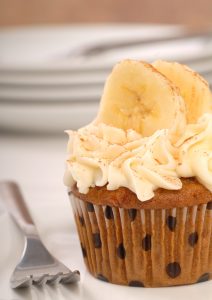 Whip butter, salt and vanilla at medium speed with an electric hand-mixer until pale and fluffy.

Add in the cinnamon and confectioners sugar 1/2 a cup at a time, combine thoroughly.

Add in the milk and beat at high-speed for 2 minutes until light and fluffy.

Pipe a swirl of buttercream onto the cooled cupcakes, sprinkle with a touch of cinnamon sugar and add a few dried banana slices.